We chat with the masterful weaver, textile designer, and gardener whose global aesthetic continues to reverberate and influence today’s interiors. 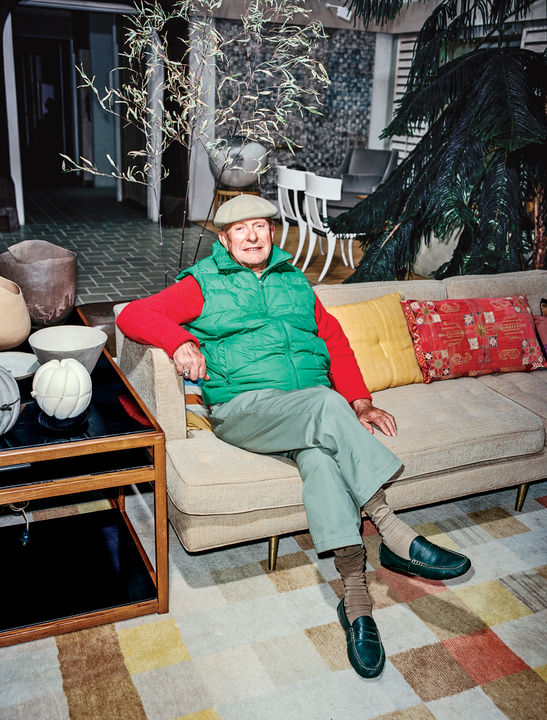 The textile designer at home at LongHouse Reserve, the Long Island estate he had designed by Charles Forberg, whom Larsen calls “an architect’s architect.” One of the most notable features of the house—inspired in equal parts by Japanese Shinto shrines and Larsen’s old New York City loft—is the 65-foot-long glass ceiling embedded along the spine of the peaked roof.

These days, eclecticism as a design motif is easily produced, thanks to today’s global market and the trailblazing work of mid-century pioneers like Alexander Girard, Ben Thompson of Design Research, and a certain Seattle-born weaver named Jack Lenor Larsen. So how did one textile artist help further the movement toward internationally inspired, richly patterned furnishings with a modern bent? Larsen grew up surrounded by nature, the son of a contractor; studied architecture in the sublime but restrained Northwest style; learned to weave with California bohemians; and then attended Cranbrook alongside America’s most rigorously trained mid-century designers. He went on to establish a hugely influential design studio—working with the likes of Frank Lloyd Wright, Alexander Girard, and Florence Knoll—while traveling the world to unearth new fabrics, inspiration, and techniques.

At 85, Larsen doesn’t indulge in the term retired. He sold Larsen Design Studio to British fabric company Colefax and Fowler in 1997 and now dedicates his time to LongHouse Reserve, his estate in East Hampton, New York, whose grounds are open to the public from April to October each year. He still travels frequently to far-flung locations (the self-professed Japanophile is taking his 40th trip to Japan this year), schedules regular exhibitions of his prized collections, and gardens voraciously. Dwell sat down with Larsen at his Long Island home and New York City pied-à-terre to quiz him on all things design. 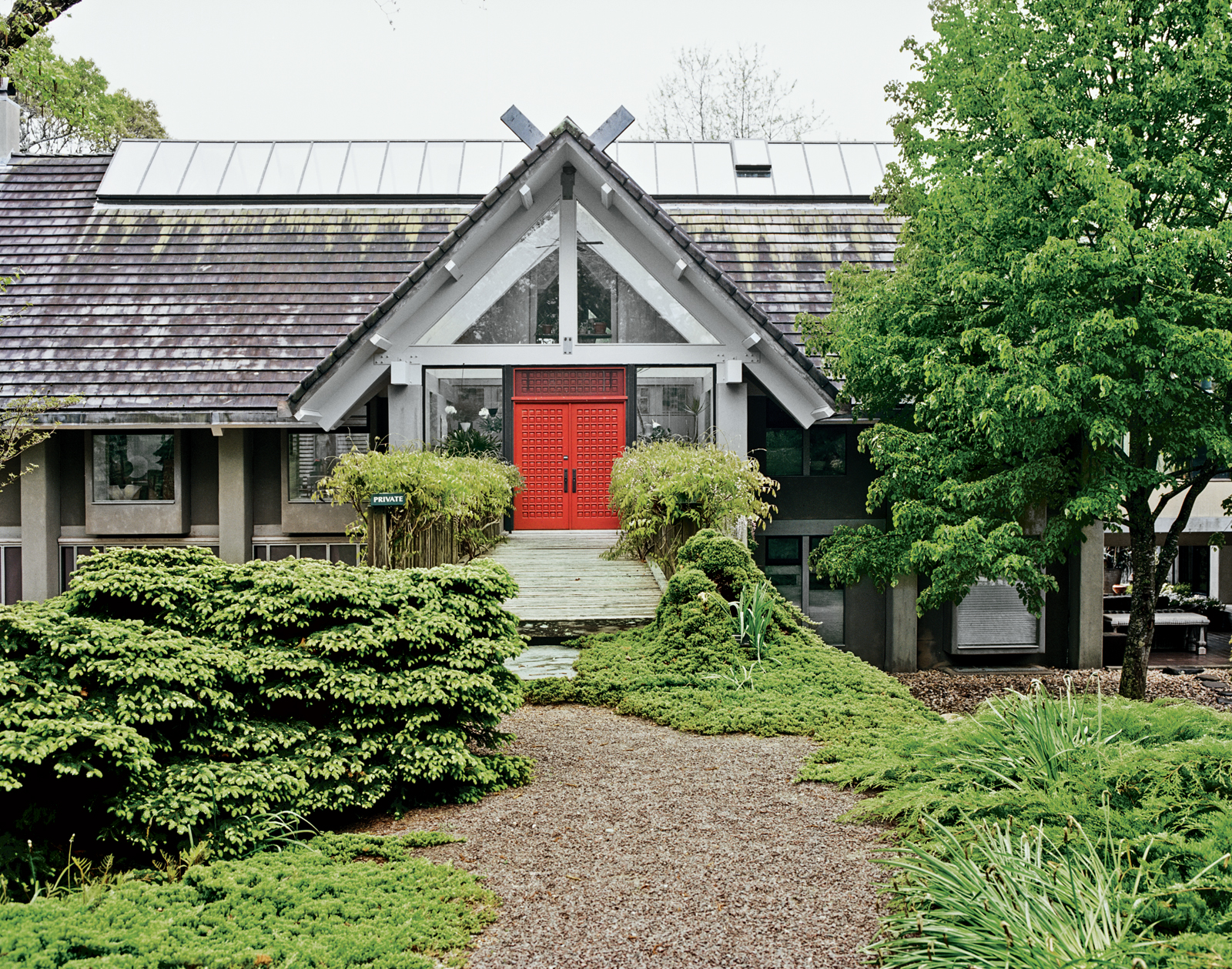 While Larsen’s home remains private, LongHouse Reserve’s 16 acres of carefully plotted gardens are open to the public from April through October. For Larsen, planting is a serious industry: “I figured out I could go away on weekends and garden without facing up to leisure.” Flora includes wisteria around the front door.

You attended Cranbrook from 1950 to 1951. How much did your time there influence your design development?

[Minoru] Yamasaki was building his first building [in nearby Detroit] when I was at Cranbrook. It was a tiny high-rise—eight stories. He put Barcelona chairs in the lobby, and we students went to see it with him. I said, “How can you do that? Barcelona chairs were meant for a horizontal space.” He wasn’t insulted—he said, “You’re right,” and [later on] he became my best chair buyer.

How did you break into the New York City design scene? There’s a well-known anecdote about you getting rejected by Knoll.

When I was at Cranbrook, in the spring [of 1951], we went to New York with our portfolios to see if we could make some contacts. It was sort of a game—how many people would interview me—but the only job I would have taken at the time, happily, was with Knoll. But “Shu” [Florence] Knoll said I was too much of an individual to fit into their mold, which was partly true. My colors were very different; my colors were earthy. Finally, by the late 1950s, architects were buying my fabric for Knoll furniture in order to get something that wasn’t red, yellow, or electric blue.

Those of us who are postwar modernists are tired of the stereotype: boxy rooms and furniture you’d expect. Eames and Saarinen: good stuff, but predictable. I don’t know if we need clutter, but collecting something that seems special to you is a way of personalizing not only a space but one’s lifestyle. My feeling is that a modern house doesn’t have to be a box; there are alternatives. 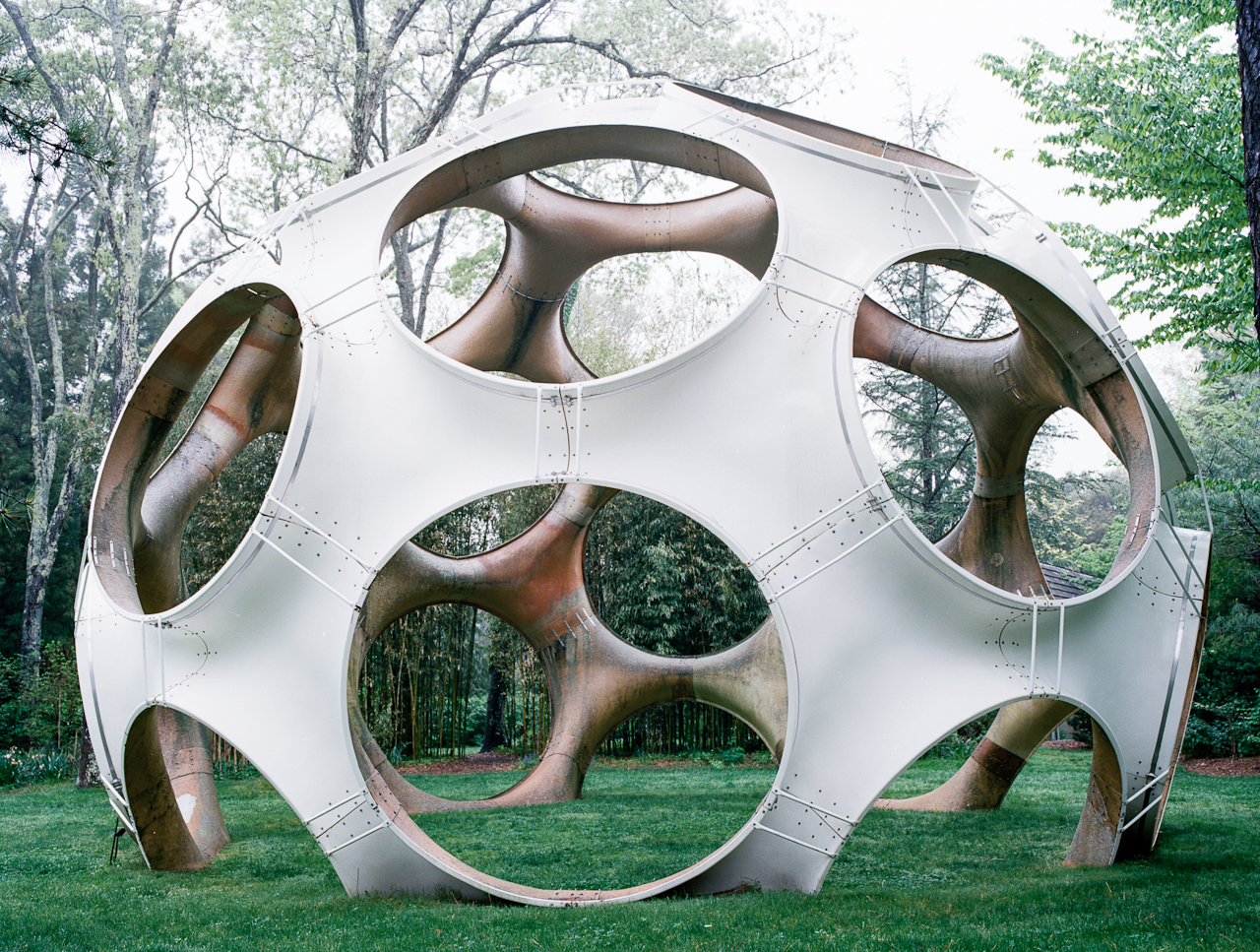 On the second lawn at LongHouse Reserve sits Fly's Eye Dome, fabricated out of fiberglass in 1998 designed by John Kuhtik from a Buckminster Fuller design.

How can you personalize on a limited budget?

Rooms in which everything is expensive are rather boring. Even traditionalists like Sister Parish used rag rugs to tone down eighteenth-century furniture and to make it more human. The contrast of silk against burlap is interesting and produces tension.

It can be rewarding to save up for something precious, too.

I used to feel very guilty that I owned fabrics that were costly, but the cost is a factor in how much you buy. People who buy 200 yards of curtain [fabric], that’s a lot of money. But, do four or six chair seats or pillows—you can have the best, you just can’t have so much of it. One yard of our fabric would cover four dining room chairs!

What would you say is your largest influence, culturally speaking?

I haven’t done anything that looks Japanese because I’m not able. It’s subtle, and I can’t play that game. But I’m certainly influenced. Things grow on you, and you don’t realize in the beginning how special they are. That’s what I see in Japan.

Now one sees ikat everywhere. When did you first start picking it up to use for your own fabrics?

In the 1970s, I was over in central Asia and Afghanistan, where they had all these affordable ikats, and in Indonesia. I was impressed by the vibrancy of the patterns and with the process itself—it’s a wonderful handcraft. The design is in the fabric not on it. And I was asked to do a book on plangi, and I told the publishers that ikat and the various tie-dye techniques are more interesting. I finally did a book on all three. 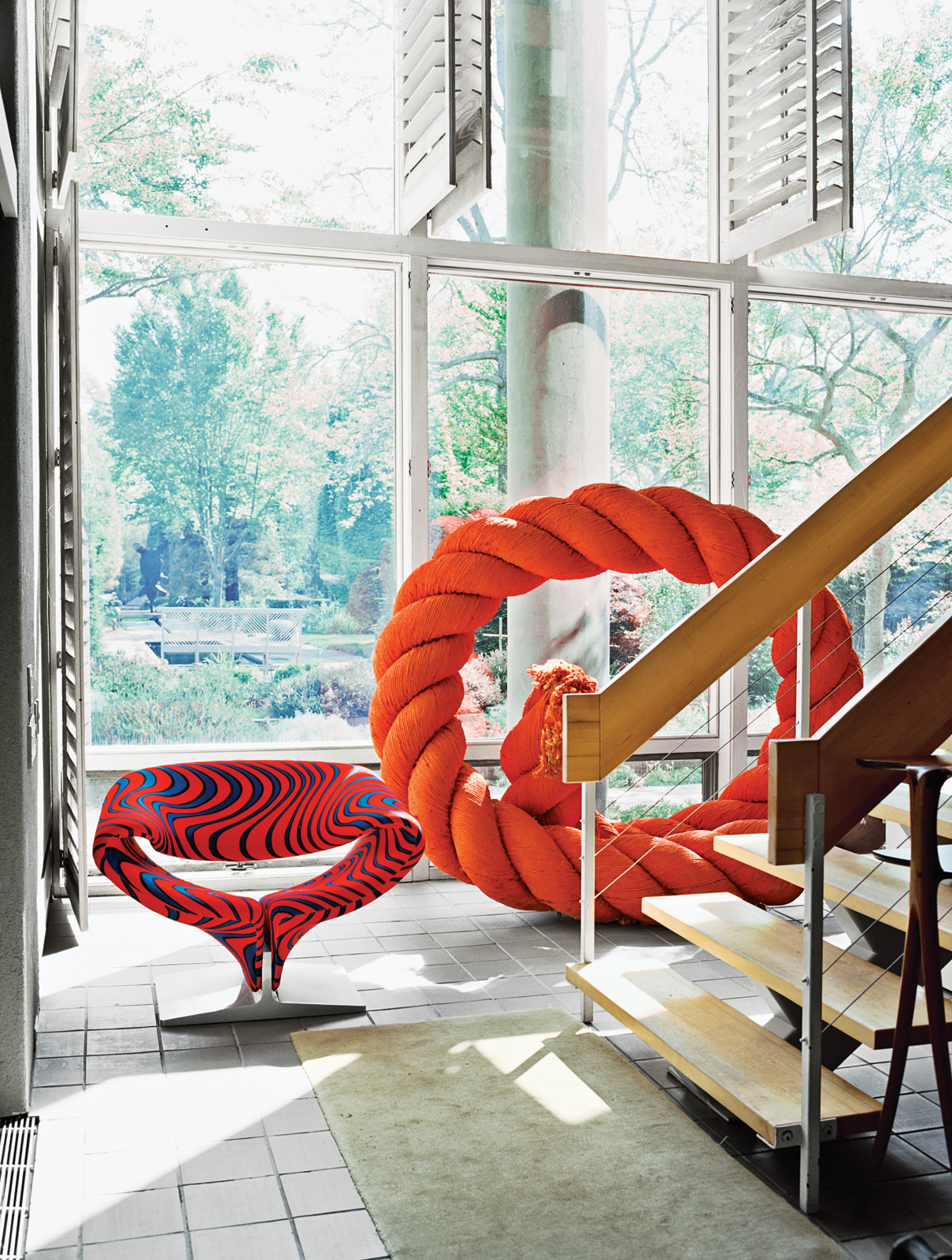 The ground floor of the house opens up to a three-story atrium and hosts a few pieces from Larsen’s wide-ranging collections, like a rope sculpture by Mariyo Yagi.

As a designer who’s done both very vivid collections and more muted pieces, what is your relationship to color?

We use more neutrals than anyone else because we have so many handcrafted textiles with great materials and hand-spun yarn. They don’t need much excitement. Fifty years ago, when people were collecting modern art, they didn’t want their furnishings to compete with their million-dollar paintings. Something durable and substantial but without color and pattern was what they wanted most. We were very good at that. “Texture” was the buzzword.

What was the industry like in the 1950s, and what do you consider your first success?

If you built a [commercial] space, you needed to find a weaver. I could compete without an inventory or a big operation. People would give me 50 percent down; I’d buy the yarns and get to work! Profits took a long time because I was embarrassed to work for profit. But eventually I had a president who didn’t share that problem. After eight years, we started Larsen International because we thought we had conquered America!

My first print collection was Spice Garden, in 1955; I commissioned a great draftsman [Don Wight] to do a fabric called Bouquet Garni. It’s a beautiful rendering of five herbs. It’s still in the collection in Europe, where they want to see more pattern on window fabrics than we do. That certainly was a best seller.

What do you think of the textile industry today?

It’s sad that Thailand and India are running out of craftsmen. In Thailand, people don’t want to take the bother to reel silk and fuss with silkworms anymore. Working in a factory seems to be more modern than staying home and weaving or farming. On the other hand, looms and the industrial processes are becoming more flexible—they can do more tricks! I keep saying, Don’t think of craft as handcraft or we’re going to die! How do we achieve craft quality with the means we have today?

Click here to read the original article on Dwell.com